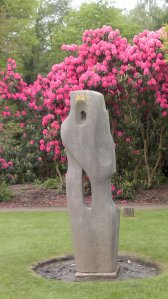 There was a kind of terrace. Roses, pots, Doric style columns and a space about four meters square. We walked out of the funeral service and the crying began or began again. But now it was unstrained because everyone around was crying. At least that is what I thought at first. But then I looked around. David was crying uncontrollably. Mum was crying in the same way but she was also looking at us children and crying in part because of the way in which we were crying. My sister was crying but it was very much within herself. Uncles and aunts were politely sniffing and the merry men who had been invited stood embarrassed looking at their shoes. And the anger unspoken built. Why did they come? To gloat at the end or to, as the phrase goes, pay their respects. For what? For the years they spent giving their labour to my father and taking from him an idea of friendship. Playing on his insecurities and need for respect, his well developed fantasy life born of his massive and unfulfilled creativity. They were paying back the excessive over time, the low interest loans.
I stood there, cried and remembered the most embarrassing moment of my growing up. After we had lost the big business we moved to a flat with a big garden. In the endless attempts my mum selflessly made to rebuild my father’s self esteem, she organised a birthday party. Now we did not as a rule do people in the way typical English families do people. We did relations, fine. But “local people” were different and anyone who was not family was in the end local people, no matter how long we had known them. Dad kicked against this because he wanted friends. His problem was that work was his only mode for engaging with people. Friends were always directly associated with the business. The pattern was simple. He would meet someone through work and they would talk. Nine times out of ten they would, if they were that sort of person, notice that this was a mark – a person who might need social affirmation more than the business relationship. So they would play on this, flatter him, praise him until my Dad would think they were friends. And when they became friends his small about of business ruthlessness would disappear. Exclusive garage repair contracts for all the companies’ vehicles, long lines of credit, hours of free business advice would follow. The pay off for dad was the feeling that he had a life beyond the confines of the bakery and home. But this birthday party was simply excruciating. No one spoke, or they spoke haltingly. The bakers did not know what to say to Dad outside work. Dad did not have a mode with them other than giving orders. I wanted the ground to open and swallow me up. All the boundaries between home and work had been broken down. The bakers did not know how to act in this social situation and nor did Dad. The conversation could not get much beyond Robert’s beer drinking preferences and a little light teasing. Before too long they started to leave and we returned to the flat. The birthday party was never mentioned, and, as far as I can remember, never repeated. Now the bakers assembled again. This time for Dad’s funeral and again they did not know what to do. They were not sure how to cope with the flood of feelings that were emerging from the family. And now, years later, at unexpected moments, those feelings can return. Grief keep is a gift that keeps giving.

There is a part of me that does not really believe my father was real. I have an idea of my father constructed of memories and photos. I have put that idea into this book. But now that my life has become so different I find it difficult to believe that he and his little world really existed. That I spent all those days and nights working in the theatre of pastries. That my Dad was the man that he was seems like something I have seen in a movie rather than something which I have lived and experienced. I wrote earlier about the dysfunction between my memory and the real chronology of my life in the bakery. The fuzzy static that enters your head in the transition from childhood to adulthood. Perhaps death too makes the signal warped, the feelings fuzzy.

We have to lose that sense of contact for a while to be able to cope with death. Otherwise I think we would go mad. Some people’s lives stop at the death of a partner, they die very quickly afterwards. As though the signal disappears altogether. When my Dad died something else seemed to take place. I seemed then all in a rush to feel the need to ask lots of questions about who he was and who I had been. But of course I could not ask him. I wanted to rest my head on his enormous warm belly as we sat on the sofa to watch the afternoon film. Indeed, I wanted to do something and something which in our culture at least will be considered old fashioned, and slightly corny. What I had come to understand was that beside all the conventional and conflicted feelings that a son has for any father, I also admired him and therefore wanted to honour him in someway. These words are jarring: admire and honour. What place do they have in this world. You grieve, be sad, cry and remember. But honour? You love, respect, fear. But admire? It is biblical and Edwardian at the same time. Yet it is exactly how I feel.

What is it that I admired in this man? Well that should be clear from what you have already read. I admired his hard work and dedication to his craft. His obvious sense of enjoyment and accomplishment in what he did. I admired the fact that he took pride in doing a job well and finishing it. So much of what I see and experience in my working life now is about getting by doing the minimum or complaining about how much there is to do. So many of the people I work with seem satisfied with mediocrity. To put it most simply, I admire the fact that my father was not satisfied with mediocrity. He did not want a job done, he wanted it done well. The making was the thing not the balance sheet. The older I get the more sense I see in this approach to life.

The other concrete thing I admired about him was that he tried to let us know that he loved us. He was not a model father and he did not live in a way in which I have modelled my life. But from a very unpromising background he tired his best to let us know how he felt about us and I admire him for that. And I want to honour him because I never made it clear enough to him when he was alive that I loved him too.

As his coffin disappeared I tried to understand the distance between me and that small body that I helped to lift out of the bath in Nice. That plastic body I viewed in the funeral parlour. The man I cried for uncontrollably in the space outside the chapel at the crematorium.

I am fourteen years old. The dispatch is full of fresh bread and cakes. They are neatly packed in wire baskets and trays. All the orders are correct and properly packed for delivery. The packers are smiling, the bakers happy and the goods themselves let off a smell and colour of contentment. Everything is ready. The oven is warm but not fully hot anymore. I feel warm, comfortable. Am I in bed? I thought I was at work. What is that voice? What is it saying: “Titch!…tictch!…TITCH!”. “What, Dad?” “Boy you are asleep on the wrapping machine? Come on boy, wake up and get back to work”. He walks away whistling. Dispatch is half full. Orders are incomplete and it is still two hours till dawn. Better find a doughnut to give me some energy.

[This is the end of the first draft of Sonhood]