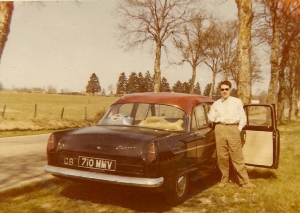 Christmas was also the only time of the year that my Dad would join in the usual running of the home. Sometimes on a Saturday morning after work he would cook a fried breakfast. Aside from this he would never do any cooking and he certainly never baked anything at home. The joke, which was also the reality, was that we never had any cakes and the bread was always stale. But at Christmas he would sometimes cook and he would also play a board game with us.This moment in the year was so different from any other that it assumed immense significance for me. We saw my father on our terms as we played that game. It was now a world governed by rules that made us equal. In the world of the board game he was merely another competitor. He never played games with us that did not have some kind of structure or in which we had invented the rules. He never surrendered control to that extent. But for a short while he did exist on the same level as us. At least until the “big film” was due to start, at which point he would leave, infuriatingly even if this was in the middle of a game. These board games were different every year until Trivial Pursuit came out and then the tradition seemed to die and we played the same rather sad game of Trivial Pursuit for year after year without changing the cards. Or perhaps I just got older and the thrill of playing with my father dimmed.

I remember one Christmas in particular. It was the eve of Christmas Eve in 1978. I was in my bedroom of our house inNewstead   Road, Southbourne,Bournemouth, Dorest. I glanced at the red display of my digital alarm. I was very proud of that alarm. Next to my radio with the directional antennae on top (on which I listened to geeky things yesterday in Parliament, Letter fromAmerica, Just a minute and the Hitch Hiker’s Guide to the Galaxy) the alarm was my favourite gadget. The numbers gave off a red glow. You could alter the minutes by pressing down switches and rolling quickly through hours, imaging that you travelled through the time the numbers marked. Games of time travel could sometimes keep me up half the night but on this night I was really trying to fall asleep. I wasn’t properly tired so it was difficult. I pushed the curtain back and watched the snow falling. The window was steamed up, cold and wet to the touch as I cleared a space to look through. Frost was forming on the windowsill and around the edges of the glass. The space between our house and next-door still recurs frequently in my dreams. It is usually flooded and impassable. I am always inside the house looking out over the flood. The water keeps me at home and I never seem to want to escape the flood. This is the first house I remember us living in and the only house we were ever forced to leave.

I remained watching until a sound from downstairs, perhaps my mum getting ready for bed, startled me. I looked at the time; I would now only get a maximum of five hours sleep. I slid, reluctantly, under the stripy quilt and snuggled down again. For some reason on nights like these I tried to stay up late listening to my radio or reading under the covers while knowing that I had to get some rest or the shift would be a nightmare. Slowly I slipped into half sleep and half wakefulness. When in this state I would often dream of the day’s games of Dungeons and Dragons or the week’s big soccer match. I was also prone to walk in my sleep. Once my mother found me in the hallway fighting a duel. She told me to go back to bed. I replied, “I’ll just finish this one off, mum”. Another time I went into my parents room to explain some intricate point about a game, then asked if they understood and went back to bed, apparently satisfied.

On this night I did not sleep walk but continued to doze until I heard my father in the bathroom. In fact I must have slept because I had not heard him come in. He had grabbed a few hours rest and was now going back to the bakery to start another shift. I closed my eyes tightly until the door opened. “Come on Titch”. I climbed out of bed. Right then:  a splash of water on my face, then many layers over my body and last coffee diluted with cold water so I could drink it quicker. Trainers on, parker zipped up and we were off to rescue the cigar smelling Jaguar from the snow. Dad’s face was pale from exhaustion but he could not disguise the excitement he felt at the drama about to unfold. It was3am.