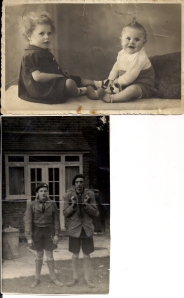 There would come a moment at which the night production and the silences came together as the shift finished. And my Dad would make me a cup of tea and give me a bun. He would sit on the edge of the knocking out table and tell stories of the night’s shift, of what went wrong and what went right. I would sit on a jam tin and listen. Drink my tea and eat my bun.

My father was born in London during the Second World War and he always thought of himself as a Londoner. In the early 1960s he moved toBournemouth. At first he hated it. Every weekend he and mum would climb into their white MG convertible and drive back toLondonfor some “action”. Gradually he came to love the coast and would only reluctantly go back to the “smoke”. ButLondonremained his benchmark. If he was thinking about developing a new line he would say: “they would buy it inLondon. NotBournemouth. Bloody provinces”. When inLondonhe would admire the cake shops and marvel at the prices – “we could never charge that inBournemouth”.

He had worked his way through theNationalBakerySchoolat Borough Polytechnic, doing night shifts and then worked in banqueting. His move to the south coast of England was to take his first proper baking job at Wilkins the Bakers, his move was supposed to be temporary. This was the job that he had trained for. This was a time in which the notion of learning a trade based on a set of skills was the dominant way in which people prepared for their careers. This was still the era of a job for life.

After working at Wilkins for a time he opened his own shop onAlma Roadin the Charminster area ofBournemouthand then at937 Old Christchurch Road. The name above this shop was Annette’s Patisserie. Rather than pay for a new sign, this became the company’s name. 937, as we always called it, was a hot bread shop with the bakery at the back. We lived in the flat above, played in the small yard behind. My first memory is in that yard. At least I think I remember this but it maybe that I have just heard the story so often that it has become a memory. We were playing in the yard when some other children started bothering my older sister Claudia. I picked up a stick and with one hand holding up my nappy, threatened them with the stick if they did not leave her alone. Soon after this incident we moved to a bungalow in Christchurch and the bakery moved into bigger premises in Kimberley Road.

My own feelings about Bournemouth are ambivalent because it has changed so much since I was a child. It was always loud, over crowded and ugly during the summer season and even as a child it was the out of season Bournemouth that I liked best. I liked the town and the beach when they were not performing. Caught unawares in autumn and winter, thinking that no one was looking, the old bitchBournemouthseemed rather an elegant resort again, something she had once been. The deck chairs were put away. The snack bars closed and boarded up .Bournemouth’s famous municipal gardens were empty. The Chines – the long azalea and rhododendron-covered paths down to the beach – had no flowers. There was a quiet, closed feel to the town, a melancholy emptiness which made for a kind of beauty and peace. You could see the elegance of some of the buildings. In the off season the underlying respectability of its large retired population asserted itself over the gauche posturing that was stirred by the sun and talk of the southernRiviera. This silent majority, who for nine months of the year went about their quiet business of strolling and enjoying the air tended to become invisible in the summer. But in the off season the signs for their bingo nights were pasted up over the adverts for the lap-dancing clubs. In the course of my childhood, the beautiful people, too poor to afford the real thing brought their nightclubs and drugs to the town and it changed, not just in the season but all year round.